Looms to weave warp and weft

The Three Pillars of MADE MILL 681 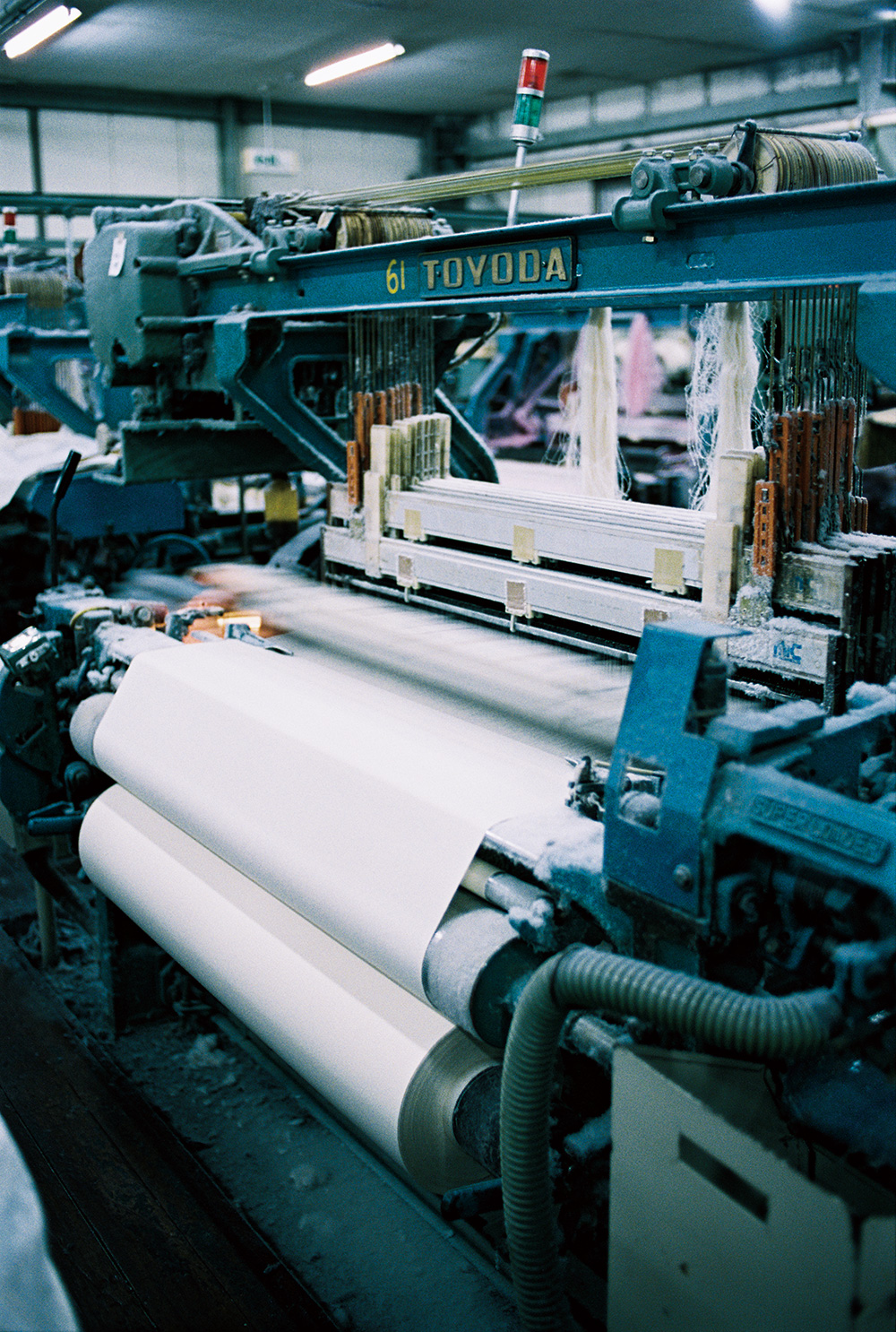 Machine operated looms originated in 18th century Great Britain and were then introduced to Japan. This machine shares the same mechanism of a classic car engine that delivers power to the crankshaft through a clutch. All power looms currently operating in Ueyama Orimono were manufactured by Toyoda Industries Corp. Sakicihi Toyoda, founder of Toyota Industries, invented an automatic loom that could automatically reset the weft supply. The key feature of the power loom is its wooden shuttle which weaves in the weft yarn with low tension, preventing the yarn from thinning down. This allows the machine to weave fluffy textured fabric. Another feature of this traditional power loom is the selvedge or ‘ticker’ which is woven into both ends of the fabric. The weave pattern is adjusted by a punched wooden card component called a ‘card’, giving the fabric a soft woven texture that is popular among many vintage enthusiasts and designers. However, not only is the power loom’s production only 1/5 the speed of the latest machines but extra maintenance is required, greatly impacting its market presence. Ueyama Orimono is one of the few weaving mills other than denim manufacturers, where power looms are operated. 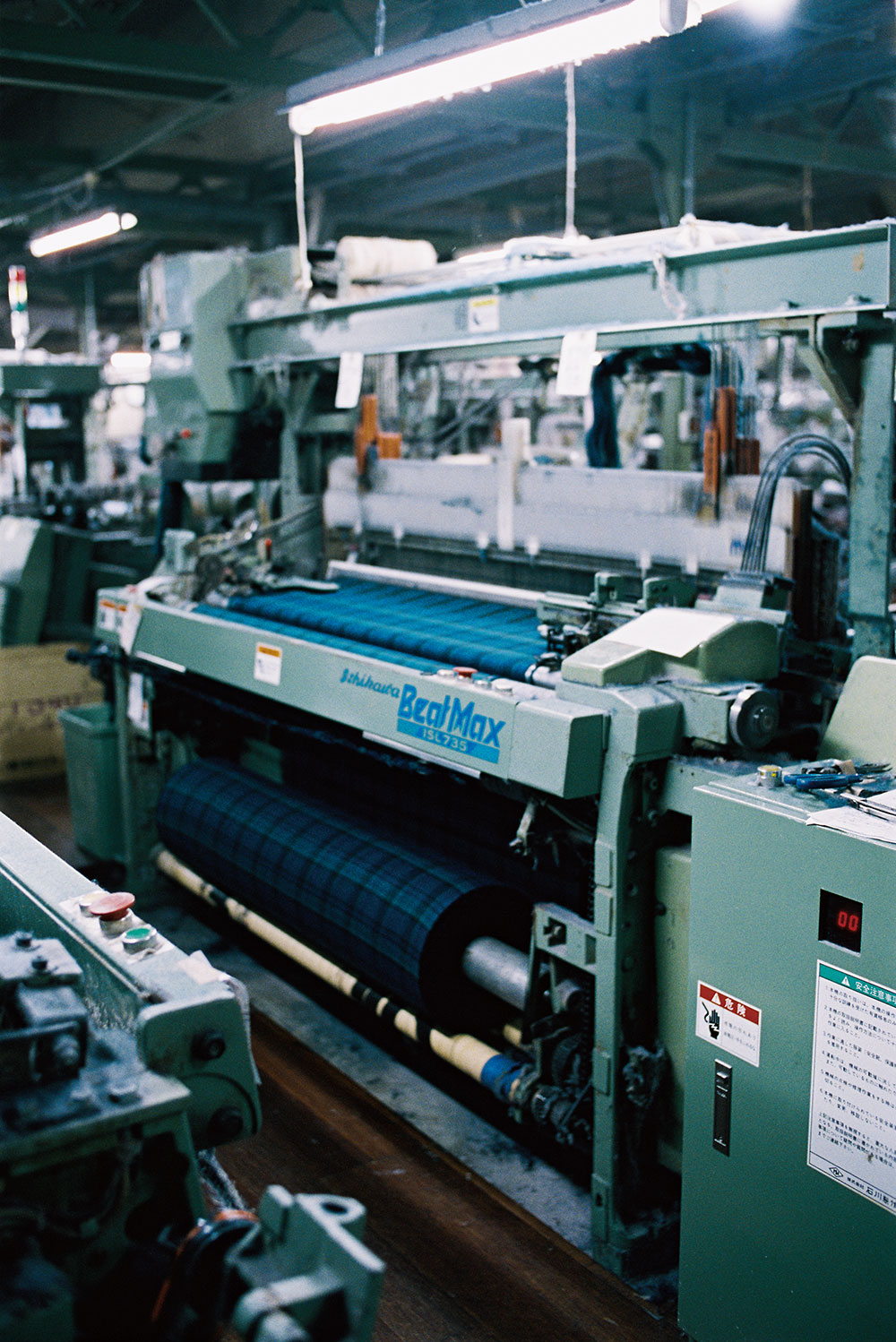 Shuttleless looms were invented to improve the production speed of the conventional power looms. These looms hold two rod-shaped metal carriers called Rapiers (derived from the European medieval sword) which are placed on both ends and carries the weft across to weave fabric. Since the inserted weft edges are cut and a new thread is inserted, multi-colored wefts are weavable into a single textile, creating complex and vibrant patterns such as plaid which is the loom’s significant trait. Patterns are adjusted using the same analog method of power looms by using a card. Here at Ueyama Orimono, up to 8 color wefts are used to produce a wide variety of different colors and textures. The modern rapier originating from Germany, started production in Japan in 1965 after its prototype was first invented in 1952. When you hear these machines, you’ll notice that in comparison to the rattling sound generated by a weaving power loom, rapier looms are more rhythmical and conjures the production of smooth fabric. 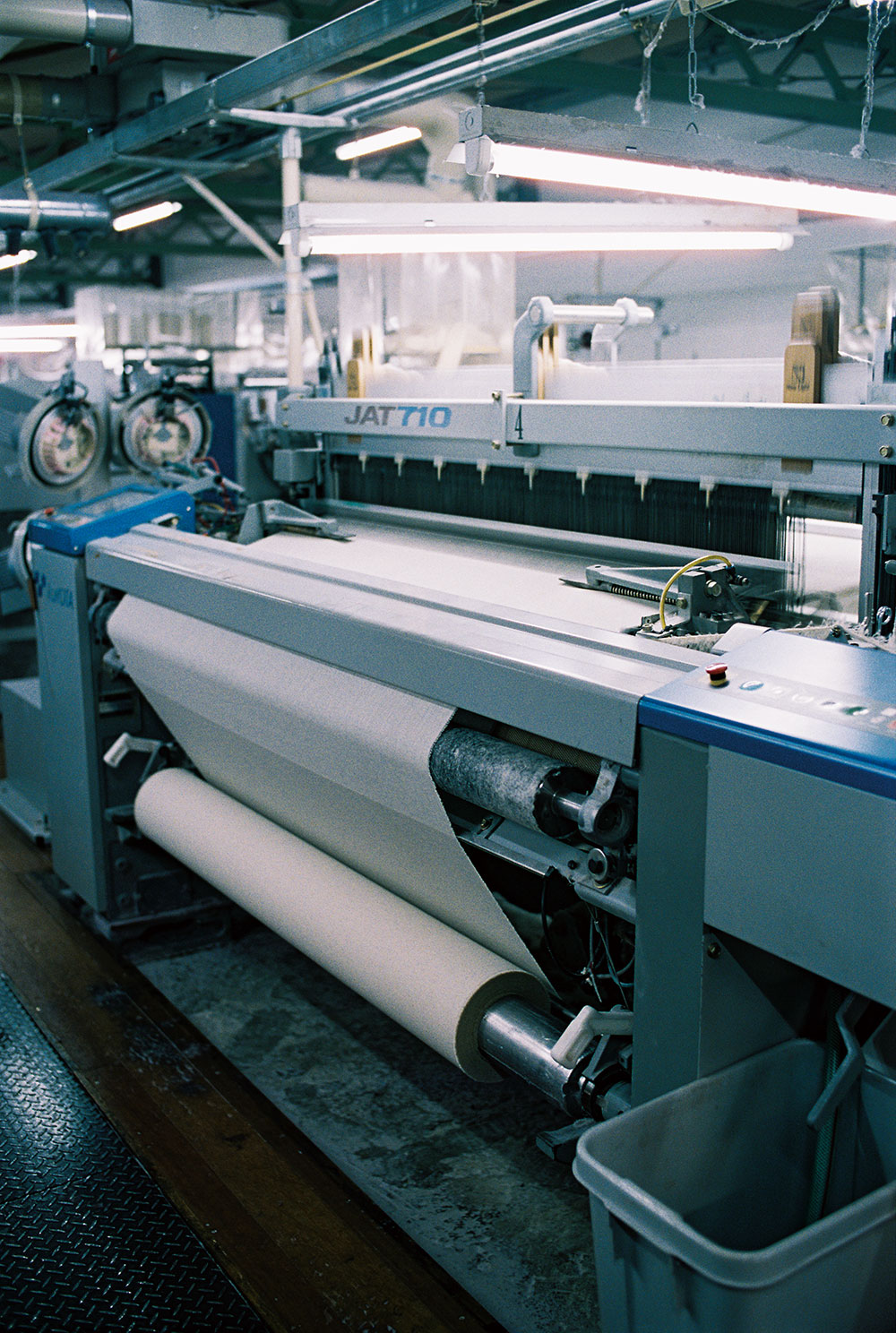 The air jet loom is a computer-controlled loom which weaves at high speed by an air blowing nozzle. Stable production of high quality fabric is obtained by operating the machine’s computer screen to specify patterns as well as production speed. Unlike the power loom and the rapier loom, both of which feeds with warp tension, the air jet loom is equipped with pressure sensors that monitor the warp tension to prevent uneven weave and fabric density, to help maintain its uniform state. Giant air ducts extend from ceiling to floor around the machine, constantly moving back and forth. This is to vacuum dust deposits released from the friction of the thread, caused by weaving speeds faster than the human eye, thus the dust is kept from mixing into the fabric. However, this near perfect high-performance machine cannot weave fabric as thick as the power loom can provide, which is one of its few weaknesses. For achieving fabric thickness, higher warp tension is required to stably carry the weft. So, when the same material and thread are used, the air jet loom cannot produce fabric as thick as other looms. This is why at Ueyama Orimono, we switch between traditional power and rapier looms depending on the type of textile being produced.